Remember to keep your dog cool in hot temperatures!

Around here right now it HOT! Bleh! And we’ve been seeing heat-stroke dogs at the emergency clinic lately because of it—peeing blood, vomiting blood, and pooing blood. Not a good thing. In fact, it's really awful!  Don’t let this happen to your dog!

Just a reminder that dogs can’t tolerate high temperatures the way humans can (and we can’t always tolerate the heat well either!). Dogs have minimal sweat glands; instead, they pant to help reduce their body temperature, but panting only works so well. Therefore, it’s not a good idea to leave your dog outside for long periods of time in these high temperatures. I only let my dogs out for maybe a half an hour at a time, and never during the hottest time of the day (which is actually later in the afternoon, not mid-day; here’s a good explanation of why). Access to water is more important than usual as well.

Also remember that leaving your dog in the car even for ten minutes at these temperatures is incredibly dangerous. Studies have shown that a car can heat up almost 20 degrees in only ten minutes. And over 40 degrees in half an hour. And cracking a window doesn’t help.

If your dog has been outside for a while (or in a hot car) and is suddenly lethargic, vomiting, has diarrhea, and/or generally looks like crap, it might be suffering from heat stroke, which is incredibly serious and life-threatening. The best thing you can do is hop in your car with the air conditioning blasting and hurry to the closest emergency vet clinic. If you’re very far from a vet clinic, you can also try running cool* water all over your dog—make sure it gets down to the skin and doesn’t just run off the fur.  You’ll still want to get your dog to see a veterinarian as soon as possible, however, because heat stroke damages the cells inside the body and your dog will most likely need to be treated.

* Why cool water and not cold?
A veterinarian that I work with told me that a common misnomer is that you should try to cool off your dog with cold water.  In fact, you should use cool water.
If you use cold water (ice cold water or ice), the blood vessels under the skin will constrict and get thinner (this is called "vasoconstriction").  This restricts the passage of blood to these surface vessels, thereby keeping more blood and therefore more heat in the core of the dog's body--this is a bad thing for a dog experiencing a heat stroke!
Cool water will work to reduce the temperature a dog because its not cold enough to cause vasoconstriction, but is a cooler temperature than the dog, so it will be able to carry some of the dog's heat away as it washes over its skin.
Posted by Laura: of Paws and Tails at 9:00 AM No comments: 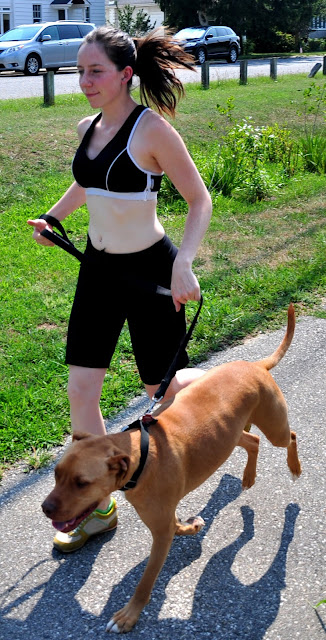 I love running with my dogs!  I love that I get to have some company, the dogs get to be out of the house and move at a pace more to their liking, and we all get exercise. Both Leopold and Halo love to run and are wonderful running buddies. However, running with my dogs did not start out being an enjoyable experience.

The first time I tried running with Leopold, I discovered the experience was not as amazing as I originally imagined it’d be. Leopold wanted sniff at things and so would suddenly stop, nearly yanking my arm out of its socket, to put his nose to a particularly interesting smell. I also had trouble getting him to run past other dogs without trying desperately to stop and play. Leopold also seemed to have a low tolerance for being tired. Or bored. I could never tell. If he decided he’d had enough, he would stop dead and lay down in the grass. During one run, we were more than a mile from home when Leopold decided he was done with running and wanted to instead lie down in the grass. We turned around right away and headed back, but he continued to lay down in the grass every few minute or so the entire way home. Passer-bys found this to be quite funny and in retrospect, I suppose it is. At the time I found it to be very frustrating (stubborn dog!) and was a little worried (maybe he’s over-heated??).
Over time, however, Leopold has become a much better running companion. He now only stops when he has to do his business, which is perfectly fine. And I’ve learned that I can’t run with Leopold on warmer days because he doesn’t get far before the grass looks more inviting than does the run.

My experience with Halo as a running partner has been, quite literally, a more painful one.  When I first started trying to run with her, she ran like a crazy dog: Halo would weave all over the place and would incessantly pull me to go faster. I tried to get her to run by my side, but was having difficulty getting her to understand. But persistence paid off with Leopold, so I kept making an effort with Halo. At the time I was trying out a new running technique commonly called “bare-foot running”, and was wearing toe-shoes during my runs. During one run, Halo was weaving more than usual, and ended up tripping me a couple times, almost making me fall. This was irritating, but the cherry on top of this awful run was when she ran in front of me and I accidentally kicked her leg in such a way that her entire leg smashed between my toes, snapping my pinky toe out.  I slowly hobbled home, each step sending a shot of pain through my foot. (Who knew such a little toe could hurt so much?) And if the cherry is the broken pinky toe, then the whipped cream was when Halo accidentally stomped on my broken toe as I was trying to get her into her crate back at the house. 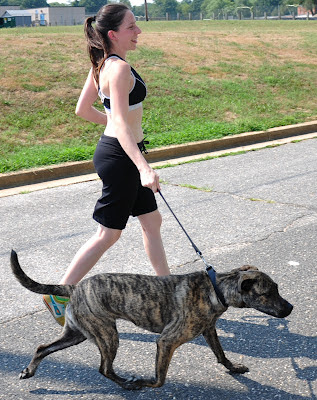 I stopped running with Halo after this incident. Partially because I stopped running for a while to let my toe heel, but also because I decided Halo was too unruly of a running partner. It was suggested by Halo’s pet training instructor that first she learn to walk nicely and then we could work on running. Chris and I spent a lot of time working with Halo and teaching her how to walk well on a leash. The next time I tried running with her, she was the perfect running buddy!

I’ve come to learn that successfully running with a dog doesn’t always just happen right away. Dogs aren’t naturally inclined to run directly at your side, suppressing the desire to stop and sniff everything and everyone. It was worth the time and effort to teach my dogs how to run with me though, as we now all benefit from the experience of running together.
Posted by Laura: of Paws and Tails at 8:58 AM No comments:

How to deal with some bad doggy behavior: playing tug with the leash while on a walk!

Leopold has always been a sweet guy, but when he was younger he would occasionally have outbursts of energy during a walk—he would go bananas. As part of his outburst, he would often grab his leash and start to play tug with it. These instances were incredibly frustrating. And embarrassing. I tried lots of ways to get Leopold to stop playing tug with the leash, but nothing I did worked. The behavior was always rewarded with what Leopold considered play because I couldn’t just let the leash go.

I looked for solutions online and came across a suggestion that worked wonders. The suggestion was to walk your dog with multiple leashes. Brilliant! I started walking Leopold with two, sometimes three, leashes. This way when he started to play tug with one of the leashes, I could drop the one he was tugging, thereby not taking part in the game and not encouraging the behavior. Leo would become bored as soon as he realized I wasn’t playing tug with him and he would drop the leash that was in his mouth and go for another leash that I was holding. I would then pick up the one he dropped and drop the one he just grabbed. It was a bit of a juggle at times, but it worked. Over then next month or so of walks, Leopold would give up trying to play tug with me faster and faster until he didn’t even initiate tug anymore. Woo-hoo!

We still play tug in the house sometimes and he loves to play tug with other dogs, but I’m very happy to say that it’s been a very long time since Leopold has tried to play tug with his leash while on a walk!
Posted by Laura: of Paws and Tails at 8:54 AM No comments:

Laura: of Paws and Tails
Hello! My name is Laura. I am currently a stay-at-home-mother caring for one wonderful little boy, two pound puppy mutts, and of course one grown and very handsome man who would be oh-so lost without me! Though... I would also be lost without him, so thank goodness we have eachother. My interests are endless and include much of the natural world, but I suppose the three main things that define my life so far are ecology, dogs, and art. Like what you read on my blog Leopold's Crate? Follow me to receive updates of my posts!

Laura is a participant in the Amazon Services LLC Associates Program, an affiliate advertising program designed to provide a means for sites to earn advertising fees by advertising and linking to amazon.com.

The commission Laura may receive as a participant of this program helps to support Leopold's Crate and it's goal of helping dog owners to improve their own dog-owning experiences.